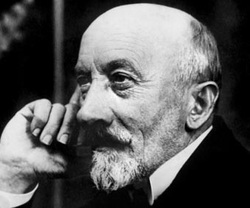 If you've seen the movie Hugo, you have already heard about George Melies, a famous early filmmaker who explored filming techniques that are still at the heart of all stop-motion films.  Melies had a life filled with a variety of pursuits, some he intended to follow from his youth, others coming about by serendipitous discoveries, with a few caused by circumstances beyond his control.  The image on the previous page is from one of his most famous and successful films, A Trip to the Moon (Le Voyage Dans La Lune), which he made in 1902.

It's always important to remember, when looking at early films, that even though they look primitive or even simple by today's standards, they were made by people who had very little already on hand to work with other than their own imaginations and ingenuity.  They were quite literally making it up as they went along, creating not only the films, but the sets, the studios, and even the cameras and projectors themselves.  The fact that so much of what the early film pioneers discovered is still part of the technical toolkit of film making today is enough to recognize just how creative and skillful film makers had to be more than a century ago.